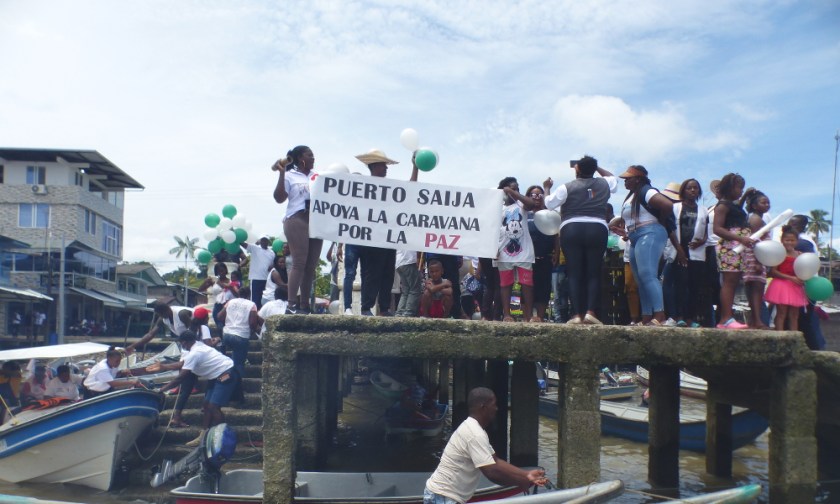 We alert national and international public opinion of the critical condition facing the civil population right now in the territories of the lower part of the Saija River, rural area of the municipality of Timbiquí, Pacific Coast of Cauca, as a result of armed confrontations between dissidents of the Farc and Marine Infantry of Battalion No. 42. This situation began in the early hours of this morning Saturday April 24. We warn that the situation risks causing the mass displacement of around 5.000 people.

We reiterate: As a social process we defend the ethnic-territorial human rights of the black communities of the Pacific Coast of Cauca. In defence of these rights we issue our information, for which we take sole responsibility. Below we narrate some of the most recent events:

At approximately 1:30 am, nine vessels of the Marine Corps No. 42 went up the Saija River, apparently reaching the Boca de Patía community in the Lower Part of the territory of the Saija River Community Council.

Around 3:00 a.m., a small plane was heard flying overhead and at dawn, when the Infantry boats began to come down, there was a loud detonation and several bursts of gunfire in the area between the Santa Rosa Street Indigenous Reserve and the Lower Part of the territory of the Saija River Community Council; a Navy helicopter flew over the area for more than half an hour. The communities directly affected by the confrontations are: the communities of Calle Santa Rosa, La Sierpe, La Unión Málaga and Las Peñas del Resguardo Indígena Calle Santa Rosa (approximately 1.000 people) and the communities of Camarones (vereda Sándal), La Herradura, Puerto Saija, San Francisco and Nueva Esperanza of the Lower Part of the Saija River Community Council (4.000 people approximately).

On several occasions we have warned about the risk facing the communities in this area and the constant humanitarian crisis that plagues the Pacific Coast of Cauca – most recently on March 24. It is worrying that the cries for justice and peace in this region continue to be ignored by an indolent government which prefers war and devastation over life. Between 19 and 22 April 2021, we toured these same territories of the Saija River with the Humanitarian River Caravan for Life and Peace, in order to send a message of the sacredness of life and reiterate our commitment to peace in the territories of the Pacific Coast of the Cauca. We heard hundreds of brave voices that, despite the violence and intimidation, every day strive for life and peace, social justice and real opportunities in the Colombian Pacific, and who yearn for nothing more than to be heard and taken seriously by this Government that shuts them up, lies to them and fails to comply with them.

Faced with this situation which was evidenced in this week’s journey, the Humanitarian Fluvial Caravan for Life and Peace raised the following demands, both to the illegal armed actors and to the Colombian state:

We reject any act that degrades and threatens the existence of the territories of the Pacific Coast of Cauca. Black and indigenous lives matter.

Based on all of the above

The COCOCAUCA Regional does not belong to any armed group and does not participate in any way in the armed actions of the parties in conflict, such as state forces, the insurgencies or any other type of armed actor. As Regional COCOCAUCA we advocate for peace with social justice, as a substantial foundation to continue existing as an ethnic group. We reject violence and demand that the lives of the inhabitants be respected.